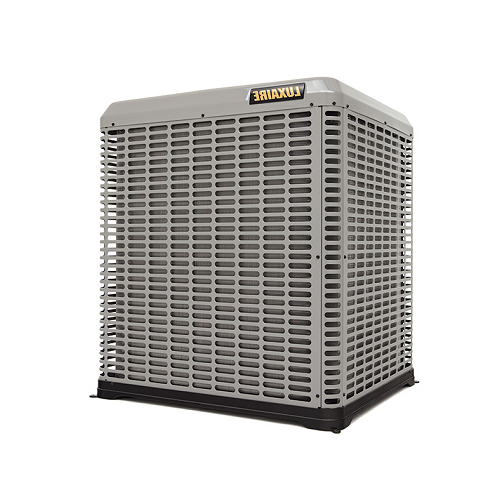 Luxaire is a premier line of high performance air conditioning equipment, continually setting the standard in features and innovation. Since 1954, Luxaire has stood for uncompromising quality and unmistakable attention to detail. The latest advancements in quiet technology, energy efficiency and lasting dependability make Luxaire an intelligent choice that delivers optimal comfort and exceptional value.

After 21 years, we are replacing our Luxaire unit. It has been great. When

After 21 years, we are replacing our Luxaire unit. It has been great. When we bought it, I had never heard of the brand, but the installer assured me that though not well known, it was a solid, dependable unit. We've had no problems with it. Only expense has been annual maintenance on it with our contractor. It's still running cool–albeit with lessened efficiency–but needs some work, so we've decided, considering its age, we should replace it. We've been very happy with our Luxaire. I've been told by many people, including a Carrier salesperson, that most units are pretty much the same; the most important thing is the competence of the installer.

I have very much enjoyed my new AC unit. It provides enough cool air for the entire home. Contractor who installed my air unit was very professional, fast and courteous.

Great system for a reasonable price. The system runs quietly and efficiently. I would definitely recommend this system to anyone who would like to find a reasonably priced and durable air conditioning unit for their home.

Published: July 20, 2016
Erma Butler
Source: furnacecompare.com
Just got a totally new Luxaire system. So far so good after 2 months. I too

Just got a totally new Luxaire system. So far so good after 2 months. I took advantage of a company offer for a free A/C unit with purchase of a new system. Good value.

Published: July 19, 2016
Total Replacement Columbus, OH
Source: furnacecompare.com
I felt compelled to share a couple of things we learned this summer when we

I felt compelled to share a couple of things we learned this summer when we had our air conditioner replaced. For one, our Tempstar central AC unit lasted just over 5 years. The company that installed it didn't register it, and so when it croaked we didn't even get the advertised 10-year warranty. This is unacceptable, we sure can't afford a new one every 5 years. We had a friend in Hudsonville that had a Luxaire that was going on 16 years old, and they strongly recommended that brand. The dealer we called was extremely helpful in pointing out the potential downfall of the old system after he performed something called a Manual J, which is how HVAC equipment should be sized. The new unit looks 10 times better, is half as loud, and our contractor put in a system that qualified us for a boat load of tax credits and utility rebates. I'd advise anyone looking for a furnace or air conditioner to look at Luxaire, which I honestly had never heard of until this whole fiasco. Also note, Luxaire donates money to Make-A-Wish. If you know what that is, enough said. If you don't, you need to look it up. We researched the company, and it made swallowing another bill a touch easier.